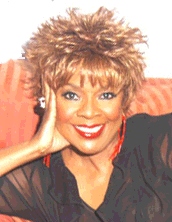 Award winning singer, songwriter and actress, Thelma Houston’s list of achievements are a testament to her ability to celebrate success and create new opportunity. Such a simple sentence to describe an extraordinary talent. This Grammy Award winning artist, with over 20 albums, is a legend who has crafted an outstanding career, ever since her very first album, and she shows no signs of slowing down. “I have so many things I want to do”, she says with typical enthusiasm and energy.

Whether she’s appearing in Tokyo, Las Vegas or London, Thelma brings audiences to their feet with her dynamic, energetic stage show. This globe trotting Diva logs over 200+ live performances annually. The ever-soulful songstress is enjoying every moment of her uber-successful career: “I still feel a tremendous excitement about performing”, says an upbeat Houston, “It’s such a part of me, and something I have to do!” And perform she does! Thelma recently rocked Rockefeller Center on NBC’s Today Show’s, dazzled ABC-TV’s “Motown 45” and glittered at ABC-TV’s “The Disco Ball”. Along with Aretha Franklin and Mary Wilson, she raised the roof on the TV specials, “Love, Rhythm and Blues,” “Soul Superstars,” “Old School Superstars” all for PBS. Thelma’s also had the pleasure of performing with Stevie Wonder on the syndicated special called ‘Motown Christmas’”

On June 23rd (2005) Thelma accepted NBC’s offer to perform on their hot new music show called ‘Hit Me Baby, One More Time’. She performed with 4 other acts and ended up being the overwhelming favorite and winning $20,000.00 for her favorite charity, AIDS Project LA.

The legendary Nile Rogers called upon Thelma to be his ‘special guest’ for a sold out concert at the world famous Hollywood Bowl. Thelma was also asked by CHER to tour on her ‘Farewell’ concert tour and recently headlined with her “Band” at Harrah’s Casino in Las Vegas and with the San Diego Symphony.

Thelma claimed the top of the Pop, R&B and Dance charts with her high-powered rendition of “Don’t Leave Me This Way”. This classic gold record gave Thelma the distinction of being the first solo female artist at Motown to win the Grammy Award for “Best R&B Female Vocal Performance”. The song has taken on a life all it’s own, and has become one of the ‘defining’ songs of the disco era, and has been licensed to well over 400 CD compilations, including the soundtrack for the movie ‘Miss Congeniality 2’” Thelma was recently inducted into the ‘Dance Music Hall of Fame’ in New York City and was honored as an ‘Apollo Legend’ on the hit TV show, ‘Showtime at the Apollo’ for her amazing career in music.

Known for her emotive style and passionate delivery, Thelma showed her musical versatility with the jazz-flavored, Top 20 hit “If it’s The Last Thing I Do”. She recorded many albums with soul legend Jerry Butler at Motown before scoring further success at both RCA and MCA.

While at MCA she worked with producers Jimmy Jam & Terry Lewis, to record the Top 20 R&B hit, “You Used To Hold Me So Tight”. Thelma lent her talents to a rousing gospel-flavored version of Bill Withers’ “Lean On Me”, with gospel greats, The Winans, featured in the hit movie of the same name. An outstanding song writer, Thelma co-wrote “Be Yourself”, the title track for Patti LaBelle’s critically acclaimed, best selling album of the same name and “The Night I Fly” for the hit film “54”” Thelma recently received the honor of recording (with the London Symphony Orchestra) an incredible duet with music great Roger Daltry (of the Who) of the classic Beatles song “Let It Be””

Thelma Houston’s first album, “Sunshower” was produced by legendary Jimmy Webb and hailed by critics as a triumphant debut from a rising new star. “I’ve been singing since I was three,” says the Mississippi-born native who moved to Long Beach, California when she was ten. “My baby-sitter was the piano player at our church and would play hymns and I’d sing them. After that I started singing in church myself and anywhere else I could!” Like so many other great performers who began their musical journey in church, Thelma’s obvious vocal talent resulted in an early recording career in gospel music with the renowned gospel group, the Art Reynolds Singers.

Thelma was cast in the “Lead” role of Madame ZinZanni in the pre-Broadway run (performing with the Seattle and San Francisco cast) of ‘Teatro ZinZanni’” Her burgeoning skills as an actress first became apparent in films such as “Death Scream”, “The Seventh Dwarf”, “And God Created Woman”, with Rebecca DeMornay and Oprah Winfrey’s, “Beloved”. Some of Thelma’s television credits include guest parts on “Cagney & Lacey”, “Simon & Simon” and “Fairy Tale Theater.”

Known as a humanitarian for her ongoing support for a charitable causes and her tireless efforts in the battle against AIDS, the City of West Hollywood proclaimed, Wednesday, Jan. 29th 2003 “Thelma Houston Day”.

She has also donated her talents to “Devine Design” ( put on by Project Angel Food) which raised over 1 million dollars to feed home bound people with AIDS. Thelma also had the honor of Headlining the “Race to Erase MS” star studded charity event in Beverly Hills, which raised nearly 3 million dollars that evening.

Thelma had the pleasure of performing at a special benefit in New York City with Phoebe Snow, Chaka Khan, Mavis Staples and CeCe Peniston as the “Sisters of Glory”. As a result of Thelma’s rousing performance she received a special request to perform at the Vatican in Rome for The Pope.

More recently, she’s been in a theatrical production of songs and stories called “My Motown Memories,” which chronicles her life from her adolescence through “Don’t Leave Me This Way,” by way of her interactions with Marvin Gaye, Stevie Wonder, The Temptations, and others.

A DVD or VHS video of Thelma “Live”, along with a CD, Photos and Press Information is available to all Promoters upon request.