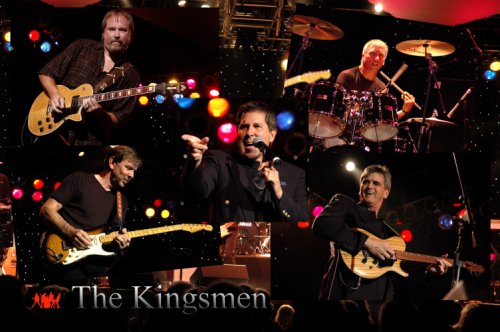 This is the phrase from the song “Louie Louie” that The Kingsmen made famous. Since this legendary hit was first released, The Kingsmen have sold over 20 million records. They have released 9 albums which have yielded 23 charted singles and four top ten-hits. “Louie Louie” has been the overwhelming theme adopted by fraternities, sororities, and high-school’s throughout the world. The Kingsmen’s “Louie Louie” has been used in movies such as Animal House, Quadrophinia, Coupe de Ville, Spaced Invaders, Naked Gun, Past Away, Dave, Jennifer 8,Mr. Holland’s Opus, to name a few, as well as being used in many advertising campaigns to associate their products with good times. The Kingsmen have become America’s Favorite Party Band of all time.

In 1963, The Kingsmen were playing local teenage nightclubs, high school proms supermarket openings, and teen-dances in Portland Oregon, when someone in the band came up with the idea of working on a cruise liner for the summer. The cruise company required a demo tape of the band. So the band went into a recording studio and recorded two songs. The session cost $36 dollars, and lasted only one hour. After playing the tape for some friends at KISN, a local radio station, the D.J.’s started playing the recording on the air. The response was so incredible, that The Kingsmen were offered a recording contract with a national label. The $36 dollar wonder  was “Louie Louie”. “Louie Louie” hit the national air waves in October of 1963, and by December, the record was dead. Or so the group thought. It seems as though, the parents of some students from the University of Alabama got upset when they were told that the song “Louie Louie” was circulating through their school and it contained questionable lyrics. The wave of parental outrage lead to the banning of the record in the state of Indiana. This action,  with the help of the national press, quickly reached world wide attention. The F.C.C. and the F.B.I. launched investigations. and “Louie Louie” took off. A few  million records later, a Federal Judge, deeming the lyrics “unintelligible” lifted the bans, and The Kingsmen were on their way. The next five years found the band traveling nationally and making guest appearances on many national television shows such as, Shindig, American Bandstand, Hullabaloo, and Where the Action Is. Appearing in movies like, How to Stuff A Wild Bikini, with Annette and Frankie, and performing with The Beach Boys, Rolling Stones, The Zombies, Peter and Gordon, and many ,many more. The band went on to record hits like, “The Jolly Green Giant”, “Money”, and “Little Latin Lupe Lu”.

The past several years you could find The Kingsmen  in a “Louie Louie” parade in Philadelphia with an estimated crowd of 200,000 plus, or doing television commercials for “California Cooler”, “Purina Party Mix”, “Pizza Hut”, etc. or appearing on television shows such as “Bloopers and Practical Jokes”, “Entertainment Tonight”, “Tops of the Pops”, “Nashville Now” and the famed PBS Special “Red, White Rock” to name a few.

Today, original members, Mike Mitchell, and Dick Peterson are joined by Todd McPherson, Kim Nicklaus and Steve Peterson as they tour the country with their special magic and great rock and roll.   The Kingsmen, still going strong. continue playing conventions, fairs, festivals, theme parks, colleges and benefits from coast to coast. The Kingsmen are known for their maturity and professionalism through out the world. They always portray hard-working, fun-loving, all-American boys. The Kingsmen  with “Louie Louie” have become one of the most famous bands in the world and are enjoyed by all generations.

In April of 1998, a United States Federal court rendered a landmark decision in favor of The Kingsmen ,  giving  the ownership of all 105 original  recordings, back to The Kingsmen.  In 1998 the US Supreme Court  upheld the decision.

In 2005 The Kingsmen were honored by the Recording Academy (The Grammy’s) with a Lifetime Achievement Award for Outstanding Contributions to the Music Industry.