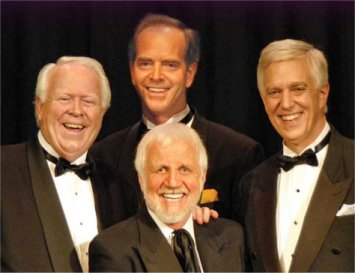 35 girls and not one boy showed up to audition for the annual Hollywood High School talent show in the fall of 1955. The next day the school bulletin pleaded for “any guys out there who can do anything” and a show business story began that sounds a little like an MGM Musical.

After stealing the show with choice hits by their idols, The Crew Cuts and The Four Lads, they quickly found themselves in demand for every kind of event imaginable.  “We didn’t turn anything down”, Bruce Belland remembers. “We once performed on the back of a flatbed truck for the opening of a parking lot. They paid us $75.00; enough to buy gas and our first matching sport coats. We were totally stoked.”

A short time later, legendary Capitol Records Producer Voyle Gilmore, who recorded stars like Judy Garland, Frank Sinatra and Louie Prima & Keely Smith, heard a tape of a live performance by the Preps and signed them to a long term recording contract. At the time the Preps were the youngest act ever to sign with a major record label. (Variety dubbed them “Capitol’s jolly juveniles”.)

While The Preps started searching for a hit, their old HHS classmate, Ricky Nelson, was launching a recording career of his own. As his records began to burn up the airwaves, he and The Preps embarked on their first nationwide personal appearance tour, which kicked off the very week that Nelson’s picture was on the cover of LIFE magazine with the caption – “RICKY NELSON – Teen Idol” – a phrase the Editors had created expressly for him.

“It was absolute insanity.” Bruce chuckles. “35,000 screaming girls at our first concert. They’d seen Rick and us on TV but here we were in the flesh. We got mobbed a couple of times – lost a few cufflinks – some ties and even a shirt or two. We sort of cut our eye teeth on that tour and Rick became a lifelong friend.”

Shortly after returning from the Nelson tour, the Preps recorded a song co-written by Belland and Larson that would create a new genre of West Coast music. Dick Clark would later refer to it as “the first surfer hit”. Jimmy Buffett would name a chapter after it in his autobiography and Brian Wilson would cite a Preps performance of the song at his high school as one of his inspirations for starting The Beach Boys.

That first million-seller was “26 Miles” (Santa Catalina). It took the country by storm in 1958 and soon the group was featured in LIFE magazine, on countless Ed Sullivan and American Bandstand shows and signed for an engagement at the world famous Coconut Grove a scant 24 months after attending there as high school prom goers. (See what we mean by an “MGM musical”?!)

The Preps’ status as superstars was confirmed later that year when they Co-starred in an Emmy-winning TV Special with Bing Crosby, Frank Sinatra, Bob Hope, Louie “Satchmo” Armstrong and Rosemary Clooney and then capped off the year by being honored as “Newcomer of the Year” by Billboard magazine and co-starring in the original “Gidget” movie with Sandra Dee, James Darren and Cliff Robertson.

A long string of hit singles followed. “Big Man”, “Down by the Station”, “Lazy Summer Night”,” Got a Girl” and “Gidget” all hit the charts. Then in 1962, The Preps’ career took another quantum leap into a new, burgeoning genre of entertainment – college concerts. Their first live “In Person” album, “The Four Preps on Campus”, was recorded at a local college and featured not only their much-admired harmony and stirring vocals but the comedic craziness which was a hallmark of every Preps concert. (Their contract actually stipulated that they be introduced as “The unpredictable Four Preps!”)

The “On Campus” album soared to the top of the charts. One particular track leapt out and became a hit single that made history in the radio and recording industry. With tongues firmly in cheek, co-writers Bruce and Glen called it “More Money for You and Me”. The lyrics suggested that all the other recording groups be shipped off to serve with the Peace Corps in remote places thus leaving “More Money for etc”.

The record was over 4:00 long – the kiss of death for AM radio which ruled the airwaves at the time. But the impersonations Bruce and the other Preps had mastered since high school were so dead on and the lyrics so satirically clever, listener demand broke the “3:00 barrier” and “More Money” raced up the charts. It was ultimately lauded as “the novelty record of the year” and catapulted the group into still another strata of show business success.

The Preps soon bought their own airplane– a 13 seat DeHavilland Dove. (“What an ego trip!” Belland laughs. “We had our name and bigger than life caricatures of each of us painted on the fuselage. Hugh Hefner, eat your heart out!”) The group began to average over 150 concerts per year which led to the Preps being honored as “the nation’s number one college concert attraction” by Billboard magazine for three straight years in the 60’s.

As “hometown boys” they quickly became an integral part of the young Hollywood scene. The Preps’ comedy impressions – highlighted by Bruce’s uncanny replication of everyone from Dion and The Belmonts to The Platters – became favorites of Ed Sullivan and the group made numerous appearances on his show as well as a record number on America Bandstand. Successful tours of Europe and The Orient followed as well as regular appearances in Vegas, Lake Tahoe, Reno, London, New York and Chicago.

By now all the fellows had married, started families and begun to enjoy success in other fields of entertainment, particularly Bruce who was by now a co-star on “The Adventures of Ozzie and Harriet”. Nonetheless, they continued to tour and record for Capitol until 1969 when, after 13 high flying years, they disbanded to pursue other projects.

In 1989, after a 20 year hiatus, Lead Singer Bruce Belland and bass Ed Cobb re-formed the Four Preps at Dick Clark’s suggestion with David Somerville of the Diamonds and Jim Pike of The Letterman (subsequently replaced by Jim Yester of The Association). That foursome toured until Cobb retired in 1996. (He died in 1999 as did original high tenor Marv Ingram.)

At that point, Yester, Belland and Somerville re-named themselves TRIPLE GOLD “The Three Tenors of Pop” and still perform periodically under that name.

Then recently, fate intervened once again when PBS asked Bruce to assemble a “one shot” version of The Four Preps for a star-studded musical special called “Magic Moments” featuring great hit makers of the Fifties like Pat Boone, Patti Page, Debbie Reynolds, The Maguire Sisters, The Four Preps and their high school idols… The Crew Cuts and The Four Lads.

Over 65 million Americans have viewed that award-winning Special and the Preps’ brief appearance started a groundswell of demand for a full blown Four Preps concert tour which recently intensified with the approaching 50th anniversary of their first million seller “26 Miles”.

Bruce couldn’t resist the idea. As the only original member of The Four Preps still actively performing, he dreamed of once again singing Lead in a great harmony foursome. He was determined that this new version of the group feature the clean, fresh harmony and irrepressible sense of fun that was the Preps’ trademark.

Bruce set out to search for three seasoned pros who shared his love of singing and, happily, his search for musical compatriots succeeded beyond his wildest dreams. Meet the personnel of the 50th anniversary version of THE FOUR PREPS:

BOB DUNCAN, high tenor, is one of the most experienced and in-demand harmony group singers in the industry and a veteran of two of music’s most iconic recording groups The Diamonds (for 20 years) and The Crew Cuts (for almost a decade).

JOE DICKEY The words “consummate pro” have aptly been used to describe this smooth-singing, silver- haired, comically droll baritone whom the other Preps insist on calling “our resident matinee idol”.

SKIP TAYLOR – by far the youngest of The Preps – (Bruce cracks “I have tuxedos that are older!”) is what the other Preps like to call “our baby bass” – all six foot three of him.

“Their songs are the soundtrack of our lives” ~Dick Clark