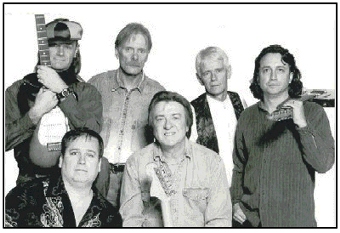 Five Man Electrical Band is one of Canada’s best loved and hardest working rock and roll bands from the 60s and 70s.

Originally formed in Ottawa, Ontario in 1964 as the Staccatos (Rick Belanger, Les Emmerson, Brian Rading & Vern Craig), the group first gained national recognition in 1967, when they recorded an album for Quality Records called, “A Wild Pair’, shared with The Guess Who. The L.P. had some success in Canada, and later that year a single was released by Capitol Records called “Half Past Midnight” which sold around 25,000 copies.

The band made a brief and unsuccessful attempt to establish themselves in Los Angeles, releasing a song called “It Never Rains on Maple Lane”, which flopped completely. Without necessary work visas, the band had a tough time gaining steady bookings and further recordings went nowhere. Capitol eventually released them from their contract and with their money running out, the band headed back to Ottawa with no record deal and a very cloudy future.

Rather than quitting, the quintet decided to change their style a bit and re-named the band after their last album. Heading back to L.A. more organized, they soon caught the attention of Dallas Smith, who recognized their talent immediately. Smith’s enterprise, Renaissance Productions, was in partnership with Canopy, a production company owned by the successful composer, Jimmy Webb and Webb’s father, Bob. Canopy expressed interest in financing a project with the band and Smith produced three songs, though none was released immediately.

In November 1969, Canopy signed a deal with MGM Records, Inc., whose parent company, Metro-Goldwyn-Mayer, decided to feature one of the tracks, “Moonshine (Friend Of Mine)”, in one of its films, “The Moonshine War”, starring Alan Alda. Unfortunately, neither the song nor the movie became a hit.

MGM records then released “Hello Melinda, Goodbye” with a song called “Signs” on the “B” side. Les Emmerson had written “Signs” after driving to California along Route 66, where he had noticed the many billboards obscuring his view, and had seen them as a perfect metaphor for the frustrations of the band and the times they were living in. When the single failed, the label quickly lost interest, and Five Man Electrical Band once again retreated to Ottawa to lick their wounds and debate their future.

Dallas Smith was not as easily discouraged. His belief in the band was still very strong, and with no apparent interest from MGM, Smith met with Clive Fox, a young music publisher who wanted to form his own label. Fox had a connection to Lionel, manufacturers of model railroad equipment, whose expansion plans included a record label. In February, 1971, MGM Record Corp. assigned all rights to Five Man Electrical Band, its masters as well as its production agreement with Renaissance (including the Canopy masters) to the Lionel Entertainment Corporation. With Fox in the office and Smith in the studio, the new Lionel label needed a promotion man, whom it soon found in the person of Abe Glazer – an old pro, by this time in his seventies – whose energy, undiminished by his age, became crucial to the immediate future of the group.

In May 1971, Lionel released the album “Goodbye And Butterflies” and its first single, “Signs”, which at Smith’s urging, now became the A-side. Glazer, Smith and the band’s manager, Abe Hoche started working the phones, trying to break the record on U.S. radio.

Meanwhile, disillusioned and broke, the band was very close to disintegration. Still in Ottawa and only barely known beyond the borders of Canada, their seven years of hard work had resulted in little but disappointment. The band members were ready to call it quits when Abe Hoche called them. “Signs” was getting a lot of air play in the southern U.S., especially Georgia, Florida and Louisiana. To top it all off, radio station CKLW in Windsor, Ontario – the powerhouse ratings leader in the middle U.S. due to its immediate proximity to Detroit, had added the record to its play list.

Quickly regrouping, the band rushed back to the States to perform some hastily arranged dates. First to Detroit, then to West Virginia, then straight across the U.S. to Seattle for a series of shows. By the time they reached the Pacific Northwest, “Signs” was a smash, eventually reaching #3 on Billboard’s Top 100 and selling over a million and a half copies.

Basing themselves in Los Angeles, the band toured extensively for the next two years, sharing the stage with some of the major acts of the era such as The Allman Brothers, Sly & The Family Stone, Jefferson Airplane, BTO and many others.

The album, “Coming Of Age” was released in January 1972 and contained the band’s second hit single, “Absolutely Right”, which sold 750,000 copies and reached #26 on Billboard.

The LP, “Sweet Paradise” followed in 1973, but problems within the band began to surface and relationships became strained. As the primary writer in the band, Les Emmerson was garnering much more attention for his songs than the others were for their musical abilities, and he was receiving more money than the others as a result of his publishing royalties. He wanted to come off the road. Never fully involved in the day-to-day business of the band, the others were finding it difficult to justify the struggle, and nine years of constant touring had taken their toll. Prior to the completion of the album, Mike Belanger left the band and Brian Rading left just as it was wrapping up. The group discussed becoming a recording unit only, but no one could agree on a direction. In the absence of Rading and Belanger, new players were brought in to try to salvage the band.

Although their next release, “Money Back Guarantee”, got some attention in Canada, it did nothing in the U.S. The follow up, “I’m A Stranger Here”, fared only a little better and 1974’s “Werewolf” got only limited airplay. Emmerson and Gerow attempted to continue with new versions of the group, but by 1975 after their last release, “Johnny Get A Gun”, Five Man Electrical Band’s heyday was over.

Over two decades later, Five Man Electrical Band’s songs are still a staple of Canadian Radio, and continuing airplay attests to their popularity. They have taken their rightful place alongside other Canadian rock legends, The Stampeders, April Wine, BTO and Guess Who.