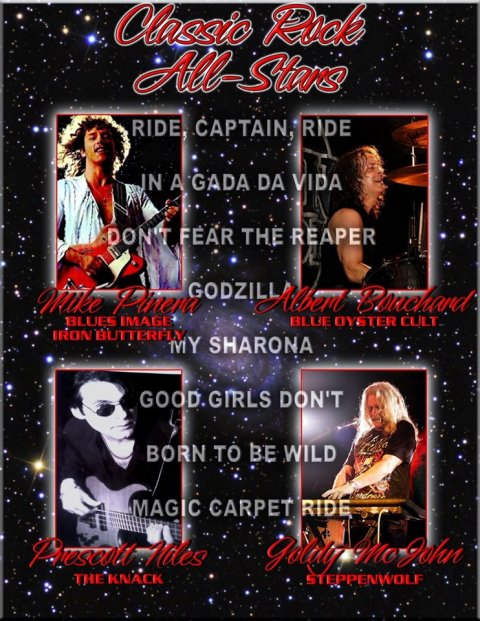 MIKE PINERA – lead guitarist, singer, songwriter, producer from legendary rock groups BLUES IMAGE and IRON BUTTERFLY. His first group Blues Image had a major hit with “RIDE CAPTAIN RIDE” which Mike co-wrote and sang. Mike later joined IRON BUTTERFLY. The Butterfly’s mega hit “IN A GADDA DA VIDA” is the first Platinum Record Award in music history. It has been inducted into the Rock & Roll Hall Of Fame. Pinera’s playing and songs are featured on the albums METAMORPHOSIS, EVOLUTION, BEST OF THE IRON BUTTERFLY, LIGHT & HEAVY. The DVD, IN A GADDA DA VIDA with Pinera is still a best seller today.

GOLDY McJOHN of STEPPENWOLF – Goldy McJohn is the keyboard player best known as the original keyboardist and founder of the group Steppenwolf. Originally a classically trained pianist, he was a pioneer in the early use of the electronic organ in rock music. The band’s exemplary debut album included “Born To Be Wild” which reached number 2 in the US charts. It was featured in the famous opening sequence of the movie “Easy Rider,” and has since acquired classic status. Goldy is the creator, innovator, of the huge screaming organ sound made popular by Steppenwolf, Deep Purple, Spencer Davis Group, Yes, Emerson Lake and Palmer, to name a few

ALBERT BOUCHARD of BLUE ÖYSTER CULT – Drummer and songwriter Albert Bouchard was a founding member of Blue Öyster Cult and a driving force through the band’s most popular first decade. Albert’s songwriting was always very present in the band, and he was alwys experimenting and working with different collaborators. Classic Rock euphoria is to hear Albert singing and drumming the monster hits he recorded and performed with Blue Oyster Cult, “Don’t Fear The Reaper” – “I’m Burning For You” and “Godzilla.”

PRESCOTT NILES of THE KNACK –  “Get The Knack,” The Knack’s debut album, was one of the year’s biggest albums, holding the number one spot on Billboard magazine’s album chart for five consecutive weeks and selling two million copies in the United States. The lead single “My Sharona” was a No. 1 hit in the USA, and became the number one song of 1979. Follow-up single “Good Girls Don’t” peaked at #11. Bassist, Prescott Niles has brought his classical training and rock & roll sensibilities to many projects outside of his work with The Knack. Prescott was thrilled to play on George Harrison’s “Shanghai Surprise” record and contribute with ex-Sex Pistol Steve Jones to the “Miami Vice” soundtrack.

BOOK THIS AMAZING ACT TODAY! YOUR AUDIENCE WILL GO WILD!

FANS SAY:
“After the show, The band did a meet and greet. I had bought his CD and looking at the line of people behind me, I was going to be happy just to quickly have an autograph. But the guys would have none of this! They took their time and answered our every question. They have the best smiles and are always interested in everything about you.” ~ Tom C. – New York City

“You can see in their faces just how much they love to perform together. Their playing is pure perfection. THE CLASSIC ROCK ALL-STARS band leave you feeling good.Their high energy performances draw you in to them like a gigantic magnet.” ~ A Fan for Life – Matt C. – Denver Colorado

BOOK THE CLASSIC ROCK ALL STARS