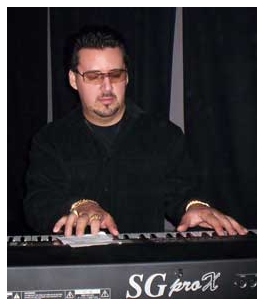 The man behind the hit, Timmy T, was born on Sept 21, 1967 in Fresno, California. Timmy became interested in music at age 9. He learned to play piano and write songs by the age of 12.

He was in a local rap group under the name Timmy Tee.  “I was writing music for various rappers but my heart was into dance music,” Timmy says. “I knew it was my calling. I spent $80 on a moog synthesizer and $250 on a Roland 808 drum machine in a local pawn shop, saved up a few bucks and went into a local studio in Fresno that was built in a garage. I wrote and recorded a song that was called “Time After Time” and took the tape to Los Angeles to make a demo 12 inch record. When I received the 250 copies, I began to deliver them on my motorcycle to various radio stations. I can recall them falling off the back of the bike one time and getting run over by a car that was behind me. I used to take the record to every club I could think of.”

Timmy finally got his big break when a Fresno radio station Hot 96 FM agreed to play his song. After it was played one time on the air, the phones lit up asking who this person was. Timmy had a hit on his hands.  The station’s PD John Clay suggested a few more stations, and one of them was Power 106 in Los Angeles. Timmy decided to take the 200 mile drive to personally deliver his record.  He recalls: “It  was after hours and I had to ring the buzzer to let the DJ know I had a package for them. He told me to leave it by the door and he would come down and get it. I signed a picture that said “Please Play My Record” and left a couple of copies.”

About a week later, Timmy’s friends were calling to say they heard his song on the L.A. station. From then on it was a domino effect. He began getting calls from radio station PDs all over the country wanting a copy. With literally no funds to support this endeavor, Timmy hooked up with a local backer who put him on his local record label. A couple of months later, Timmy got a call from Quality Records and the rest is history!

In the wake of the phenomenal success of “One More Try”, the dance hit, “Time After Time”, was sometimes overlooked and Timmy was often unfairly labeled a “one hit wonder”.  “Time After Time” made the Billboard Top 40 and went gold, selling over a half million copies. Timmy T has sold millions of records worldwide.

His string of hits continued with songs such as “What Will I Do”, “Cry A Million Tears”, “Too Young To Love You” and “Paradise”. You can hear Timmy’s hit song“Over You” on the motion pictures soundtrack of “The Raffle”, which included such other artists such as Elton John and Michael Damian.

Timmy has toured throughout the world, entertaining millions of fans in the United States, Canada and Mexico, as well as Belgium, Holland, Germany, England, Japan and many others venues.

Timmy T continues to tour across the country, singing his latest songs along with his timeless 90s hits, gaining new fans everywhere he appears.