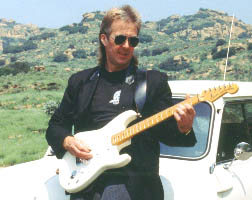 The Spencer Davis Group was the first British band signed by Island’s Chris Blackwell. He spotted the group playing a small club in Birmingham, their hometown. Despite the band’s name, the main man was a 15-year-old singer/keyboards player called Steve Winwood.

“I signed the group because they had a kid out front who could sing like Ray Charles while sounding like himself. Quite an achievement,” says Blackwell.

The rest of the band was comprised of Steve’s brother, Muff Winwood (bass), Peter York (drums) and Spencer Davis (guitar).

The Spencer Davis Group were signed to the Fontana label — Island was too small to handle a potential chart band — in 1964. The first single was a cover of bluesman John Lee Hooker’s “Dimples,” released in August of that year. The band were to release three more singles before starting a remarkable sequence of classic chart records.

“Keep On Running,” with it’s distinctive fuzz guitar intro, hit number one in November of 1965. It was followed by another number one,“Somebody Help Me,” in March of 1966.

In the next fifteen months The Spencer Davis Group were one of Britain’s hottest bands, ending their chart life with two all-time greats — “Gimme Some Lovin” and “I’m A Man.”

By the time “I’m A Man” jumped into Britain’s Top 10 — at the start of 1967 — Steve Winwood was already planning a new phase in his career, the creation of a new band called Traffic. His three years at the helm of the Spencer Davis Group had confirmed Steve Winwood as one of the greatest voices in British popular music; the opening chapter in a long and enduring career.