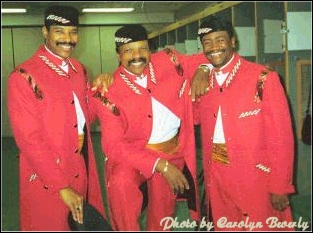 From the late 1960s through the 1980s, the Delphonics defined sexy, soul love songs like no other group of its era. Formed by brothers Wil and William Hart, the Grammy winning group became famous for their great songs, starting in 1968 with “La La Means I Love You” and including many more hit songs such as “Hey Love,” “Break Your Promise”, “Somebody Loves You”, “I’m Sorry”, “Tell Me This Is A Dream,” “He Don’t Really Love You”, and many more. Not only were the Delphonics known for their smooth singing and rich harmony, they also gained fame for magnificent choreography. The use of strings and French horns in the background of the Delphonics’ songs gave the group a unique musical identity second to none.

And the group’s trademark capes were a touch of pure class. Yes … this legendary group set the standards for vocal abilities, style and grace.

As brothers Wil and William went their separate ways; each forming a new vocal group which stemmed from the old unit. One of the groups formed was Wil Hart & The Delphonics, which now consist of Wil, Eban Brown and Dr. S. Love.

Since its inception, the Philadelphia based Wil Hart & The Delphonics, have received rave reviews from audiences around the nation. Fans in cities such as Detroit, Baltimore, Washington D.C., Atlanta, Miami, Philadelphia, Boston, Newark and Los Angeles have packed clubs and concert halls to hear the group. Wil Hart & The Delphonics have also built an international following as they have dazzled audiences in England, Germany and Japan.

Eban Brown, who sings lead on many of the group’s classic songs, has mesmerized and overwhelmed fans with his uncanny, vocalization of hit tunes, which made the Delphonics great. Not only does Brown match the vocal skills of his predecessor, he exceeds, transcends and vocally signs each song with a unique, personal touch that leaves audiences totally spellbound. All who hear him won’t easily forget this talented performer.

Dr. Love, who specializes in operating on love songs, anchors the group with his tremendous vocal range and silky-smooth stage manner. When the Doctor makes his vocal house call, all ears and female hearts are quickly healed. When the group is performing “The Doctor” is definitely in the house.

Wil Hart, who was the lead vocalist on several Delphonics’ hit songs including “Hey Love,” “Didn’t I Blow Your Mind”, “When You Get Right Down To It”, was also the driving force behind the success of the group. Hart created the group’s legendary stage moves and designed the famous outfits, complete with capes for the original group. The choreography and outfits with capes continue to be trademarks of Wil Hart & The Delphonics. Wil Hart continues to maintain the same leadership and vocal excellence he always has.

Wil Hart & The Delphonics will continue to tour because, with this group, only the sky is the limit. Fans from New York’s famous Apollo Theater to The Strand in Southern California will continue to rave over this trio. If you find that Wil, Eban and Dr. Love are coming to a stage near you soon, make it your business not to miss their awesome show.