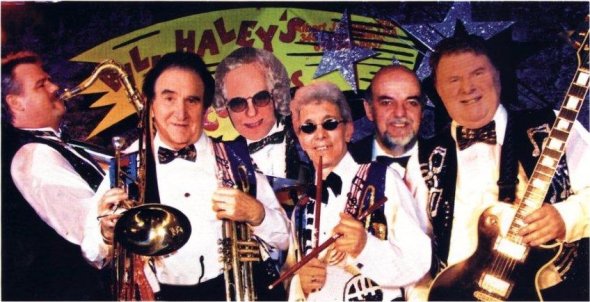 Bill Haley’s Comets were the first Rock and Roll band. Since 1952, they have sold over 80 million records for leading labels such as Decca, M.C.A., Warner Brothers, Sonet, and Essex. Moreover, the group has earned a place in “The Guinness Book of World Records”, for selling 43 million copies of its greatest hit, “Rock Around The Clock”, and has appeared in seven motion pictures, including “Rock Around The Clock”, “The Girl Can’t Help It”, and “Let The Good Times Roll”.

Al Rappa, “The Original Walking Bass Man” seen in many motion pictures and in “Dick Clark’s American Bandstand” video, has been with “Bill Haley’s Comets” since 1956.  A very versatile musician, Al Rappa performed with many of Philadelphia’s well-known bands in the 50s before joining the Comets. He plays bass, organ, trumpet, and sings, and at times, has rocked the house with his one-man shows. When Bill wanted to do an instrumental album for Decca, he called upon the multi talents of Al Rappa to join the group on bass. “Joey’s Song” and “Skokian” both became big hits on the national charts and Al’s long association with the Comets had begun.

Then, “Rudy’s Rock” became the biggest instrumental hit. Al created his famous bass act, which consisted of climbing up the neck of the instrument and throwing it around, not to mention taking the sax player for a ride on it without missing a note. The Comets left for their famous world tour and played England, Germany, Sweden, Mexico, and Canada. Al Rappa always stole the show and delighted the audiences all over the world, by leaving the stage during the performances … hence, he became famous as “The Original Walking Bass Man”.

Al was there on all of the important television shows as well, and is seen on several of the “American Bandstand” videos, produced by Dick Clark. Besides the television shows, look for Al in several of Bill Haley’s movies, made in Germany and Mexico. Speaking of Mexico, it was Bill Haley and The Comets who brought the twist to that country and had several hits on the Orfeon label.

During the 60’s and 70’s, Al Rappa could be heard on many of the Bill Haley albums recorded on Decca, Warner Bros., Apt., Nicetown, and Music City. You might say Al Rappa is the best known and most loved Comet of them all, because of his great sense of humor and showmanship on stage.

During the 80’s, Al gained legal rights to the name Comets and toured all over the world, keeping the music alive with his group and appeared with the Who’s Who in the history of rock and roll, namely: The Drifters, Joey Dee, Fabian, Bobby Rydell, Freddy Cannon and many more too numerous to mention.

Today, Bill Haley’s COMETS are still on the road, proving again and again, that they can still “Rock Around The Clock”.