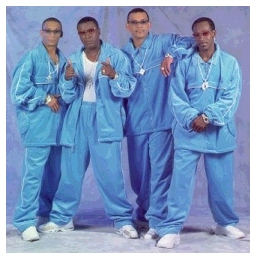 The four members of Soul Tempo, Jerry Brunson, Tony Burnett and brothers Kevin Mitchell and Phillip Mitchell, grew up together.

The strong chemistry between them is reflected in their great vocal sound and their on-stage charisma.

The group has worked hard to achieve their rapidly increasing notoriety. In addition to previous recordings, their list of live appearances is wide-ranging (from the The Apollo Theater to Disney World, to Kennedy Space Center and Radio City Music Hall and many other national and overseas venues, and with such artists and performers as Boyz II Men, Yolanda Adams, Elton John, Courtney Vance, Patti LaBelle, Robert De Niro and Wynton Marsalis).

Things first started to coalesce for the foursome when they got the chance to audition for film producer/director Penny Marshall for her movie then in production. Ms. Marshall became an instant fan, as she remains to this day, and Soul Tempo was given an on-camera singing part in The Preachers Wife, with Whitney Houston and Denzel Washington.

But the group wanted more. They were determined to get their shot on the record scene and in 2000 released a CD album on their own label. Immediately there was some interest at radio, including airplay and phone response at premier urban station WHUR in Washington, DC. But while the four were in key as a vocal group, they were not experienced at being record company execs and pondered their next move.

Then Soul Tempo was introduced to veteran songwriter, producer and A&R Man, Denny Randell, famed for his legendary songs such as A Lover’s Concerto (co-written with Sandy Linzer), Opus 17 and Swearing to God, a big hit for Frankie Valli in the 70s and again, for Soul Tempo in the new millenium.  Denny signed the group to DRC Entertainment and (while planning their new sessions) re-released their CD on his and his partner and collaborator, Biddy Schippers, label,  Music Avenue Records.

Soon the title cut “I Can’t Wait” began receiving airplay at radio stations WRKS and WCBS in New York City, WHUR in Washington, DC re-added the cut and then a full add and chart success on the ABC National Radio Network of 80 stations across the U.S.

The group’s growing number of fans, both radio programmers and listeners alike, were not disappointed with their 2003 CD, Charmed and Dangerous, featuring such tracks as “Too Hip Hop for The Room” and “Celebrate Our Love”.

In 2005, with the release of Rendezvous, Soul Tempo treated fans to more of their velvet harmonies with the national club/dance hit “ST’s House Remix” of “Swearin’ To God”, and the soulful “You’ll Never Be Alone” (“Deep Version”).