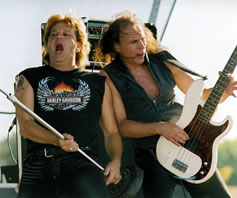 Dubbed “the American Rolling Stones”, the Shadows of Knight shot to the top of the music charts in 1966 with the rock anthem“GLORIA”.

Over 8 million copies later, those three famous chords and that unashamed mating chant has found immortality among fraternities, presidents, wanna-be’s, rock stars and the rest of the nubile world.“GLORIA” has become the party song of generations and the Shadows of Knight have become the legendary messengers.

Chicago’s “golden boys of pop” released four subsequent hits, “I Got My Mojo Workin”, “Bad Little Woman”, “I’m Gonna Make You Mine”, and the much lauded version of the Muddy Waters tune, “Oh Yeah”. In late 1968, the band left Dunwich Records (Atlantic) to sign with Team Records (Buddah) and the ” bubble gum” empire of Jerry Kasentz and Jeff Katz. They recorded anonymously on tracks such as “Quick Joey Small”, “Yummy, Yummy, Yummy (I’ve Got Love In My Tummy)”, “Chewy, Chewy” and many more hit records. The Shadows of Knight then released their final chart hit, “Shake !” culminating in another million seller.

Today, brings original vocalists, Jimy Sohns and veteran bassist, Lee Brovitz, full circle. Sundazed Records has re-released the “Gloria” and “Back Door Men” albums to critical acclaim. The Band has embarked on a reunion tour aptly name “Gloria’s Back!” and has reclaimed the title of America’s premier party band, performing the creme of their ’60’s hit’s and a host of enthusiastic new material.