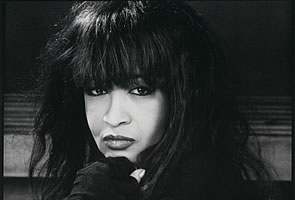 Only a few artists in history have been capable of defining an entire era in pop music. Ronnie Spector is one of those artists: the embodiment of the heart, soul, and passion of female rock and roll in the 1960’s. No one has ever surpassed Ronnie’s powerful trademark vocals, her gutsy attitude, her innocent but knowing sexuality.

Ronnie Spector cites Frankie Lyman as her earliest vocal influence. She cut her first records at age 13 as the lead singer of the Ronettes. At the Peppermint Lounge, disc jockey Murray “The K” Kaufman discovered the teenage trio and promptly hired them as dancers for his Brooklyn-Fox Theater rock and roll revues.

Beginning in 1963 Ronnie Spector. as lead singer of the ultimate girl group, The Ronettes, recorded a long string of classic pop hits: powerful poignant teen anthems like the Grammy-winning “Walking in the Rain”, “Do I Love You”, “Baby I Love You”, “The Best Part of Breaking Up”, “I Can Hear Music”, and their international Number One smash “Be My Baby”. These records are among the best-loved and most-emulated recordings in the history of rock and roll.

Across the Atlantic, Ronnie Spector and the Ronettes headlined over acts like the Rolling Stones and Yardbirds. The Beatles personally requested that the Ronettes join their final American tour. Ronnie Spector is the only American vocalist to have been backed by all four Beatles on her George Harrison-produced single, “Try Some, Buy Some” in 1970.

Ronnie also sang on records by Jimi Hendrix and Alice Cooper. In 1976, Billy Joel wrote “Say Goodbye to Hollywood”, a tribute to Ronnie which she recorded the following year with backing by Bruce Springsteen the E Street Band.

Her Christmas songs with the Ronettes, “Frosty the Snowman”, “Sleigh Ride”, and “I Saw Mommy Kissing Santa Claus” are holiday classics and an integral part of every Christmas season.

Ronnie’s 1986 duet with Eddie Money, “Take Me Home Tonight”, was a Top Five Grammy-nominated hit across the nation and a heavy rotation video on MTV. Ronnie’s classic recordings- “Be My Baby”, “Baby I Love You” and others have been featured in soundtracks for such feature films as Baby Boom, The Pickup Artist, Good Fellas, Mean Streets, For Keeps, Just One of the Guys, and Nine Months. “Be My Baby” set the tone for of the box office smash Dirty Dancing. In September 1988, she joined the cast of the Dirty Dancing stage show for a six-week international tour.

In 1989, Ronnie took time off to write the story of her remarkable life and great music. Be My Baby, How I Survived Mascara, Miniskirts, and Madness, published by Crown Publishers, in 1990 was an international bestseller and was published in paperback by HarperCollins in 1991.

In the 90’s Ronnie returned to the recording studio to record the theme song for Roseanne’s ABC TV cartoon, “Little Rosey”, as well as the haunting “Farewell to a Sex Symbol” for the cast album of Tim Rice’s Tycoon, and “Rockin’ Around the Christmas Tree” for the top ten platinum album, A Very Special Christmas 2. In 1999, Ronnie released the critically acclaimed EP She Talks to Rainbows. Included on the EP were Brian Wilson’s “Don’t Worry Baby”, Johnny Thunders’ “You Can’t Put Your Arms Around A Memory”, and a duet with producer Joey Ramone on his own composition “Bye Bye Baby”. The EP was released in America on the cutting edge Kill Rock Stars label.

The style, look, and sound of Ronnie Spector have served as an inspiration and role model for a generation of rock and roll women. In her sensuality, attitude, and dress, Ronnie created a personal and performing style, which has proven revolutionary. On stage, record, or on video, a Ronnie Spector performance is a jubilant celebration of the power of pop.