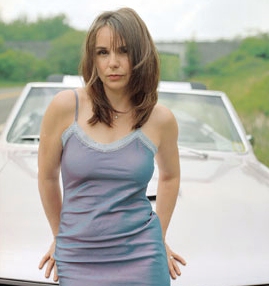 Patty Smyth, both with her hit band Scandal and as a solo artist, has always been, at heart, a rock and roll chick, and that’s no truer today for the mother of six, now back on the road and raring to play for fans new and old. If Smyth did nothing but marry New York punk poet Richard Hell (with whom she had her oldest daughter Ruby), then noted tennis punk and commentator John McEnroe (who had three kids of his own and then two more with Patty), that would be amazing enough, but she’s also earned both Oscar and Grammy nominations, recorded a series of hit singles and albums and enjoyed a successful reunion on VH1’s Bands Reunited series.

Smyth was born in New York City, and took after her mother, a show business enthusiast who literally ran away to join the circus and, at various times, a trapeze artist, from her teeth, managed legendary feedback guitarist Link Wray and ran or owned several prominent Greenwich Village nightclubs, including the Gaslight, the Café Wha?, Four Winds and the Zig Zag. Patty would rather hang out there than go to school, listening to music and hearing stories from her mom about the likes of Janis Joplin. “It was a complete bohemian upbringing,” she says.

Patty was 15 when she played her first gig at New York’s Folk City, and spent the next several years honing her craft by performing short musical sets at Catch A Rising Star in between then-unknown comedians like Jerry Seinfeld, Paul Reiser, Larry David and Chris Rock. The weekends-only gig paid only cab fare and to make ends meet, Patty waitressed  at a steak house. It was there that one day she answered a ringing payphone and met Zack Smith, who would later ask her to front a band with him called Scandal. The rest is history.

The initial lineup included Smith and Smyth, guitarist Keith Mack,  keyboardist Benjy King, the late Ivan Elias on bass and the late Frankie LaRocka on drums (Thommy Price would take over the drums after the first LP).

The group burst onto the scene in 1982 with a self-titled debut that turned out to be the best-selling EP in Columbia Records history, featuring the hit single, “Goodbye to You,” a song Smyth co-wrote with Smith. Aside from “Goodbye to You,” a #1 MTV video, Scandal included the hits “Love’s Got a Line on You” and “Win Some, Lose Some.” The group’s first full-length album, The Warrior, released in 1984, climbed into the Top 20 on the sales chart, eventually earning RIAA-certified platinum status, with more than a million in sales.

“The Warrior” remains popular to this day, featured on the radio station Flash FM in the video game Grand Theft Auto and in the third installment of Guitar Hero, Rocks the ‘80s. The song is also featured in a parody of an iPod commercial on the popular animated Fox series Family Guy.

For all her ‘80s achievements (including being asked to join Van Halen while 8 months pregnant – an offer she declined), Smyth’s most impressive successes came in the ‘90s. Her 1992 solo album turned out to be a career peak. “Sometimes Love Just Ain’t Enough,” a song Patty wrote and featuring a performance by Don Henley, became  Smyth’s biggest hit ever. The song reached #2 on Billboard’s Hot 100 and stayed there for six consecutive weeks, going #1 on the AC chart for four straight weeks, as well as number one on many other national charts. The song was also named BMI song of the Year. The album earned platinum status, but more impressively, the single earned platinum status, as well, which is something that rarely happens. The album also produced the hits “No Mistakes,” “I Should be Laughing” and “Shine.”

Two years later, Patty was brought in to sing and co-write “Look What Love Has Done,” the Oscar, Golden Globe and Grammy-nominated theme from the hit Arnold Schwarzenegger / Danny DeVito comedy, Junior. That year, she was asked to perform it live at the 1995 Academy Awards telecast.

Patty’s Greatest Hits album was released in 1999 with two new tracks, one of which was on the Armageddon Soundtrack and sold over 8 million copies. Any comeback at that point, however, would have to wait until after the birth of her youngest child. “Four months of bed rest made it kind of hard to tour,” she says.

Spurred by an impromptu reunion with her old Scandal mates at the end of 2004 on VH1’s Bands Reunited, the band has regrouped, with two original members in Keith Mack and Benjy King and a new rhythm section, bassist Tom Welsch and drummer Eran Asias.

“This is probably the best band I’ve ever been in,” says Smyth, who has begun touring and even writing new material. “We have so much fun together. To say I’m rejuvenated is an understatement. Back when I first started with Scandal, I felt like I had to carry a lot of the weight because it was up to me to sell those songs. I don’t feel that way now at all. I work now because I want to.”

With new songs in the can like “Make It Hard ” and “End of the Girl,” Patty plans to return to the studio to record the new material.

As for her current revival, Patty suggests: “I don’t play to a pre-recorded track or have 15 dancers on-stage. There are no smoke and mirrors. We feel that people are yearning for music that’s real. It’s just these four guys and I, out there seriously kicking some ass and having fun. We’re so tight, if I fell down a flight of stairs, they would follow me and we’d all land on our feet. I don’t have to think of anything else when I’m performing. For that hour, I can step out of my life. It’s like flying. I feel like I’m at the top of my game, and totally in my element. It’s an unbelievable joy.”