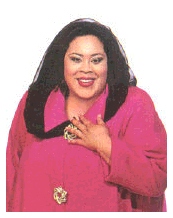 The artist is Martha Wash (the voice of C&C Music Factory, Blackbox, Seduction, and The Weather Girls). She sang lead on the hits “Everybody Dance Now (Gonna Make You Sweat)”, “Everybody, Everybody”, “It’s Raining Men”, “You’re My One and Only True Love”, “Strike It Up”. She is known in the nightclub scene as the “Queen of The Clubs”.

“I stand alone in the eye of the storm. Pressures all around, tryin’ to wear me down. But it’s alright, I won’t give up the fight. I said, ‘Lord, lift me up!’ Let me rise above. Nobody’s gonna take my pride, I won’t stop, I will not be denied”. True words from the legendary Martha Wash.

Like many artists, Martha Wash has felt the ups and downs of the roller coaster like industry called music. From performing the unaccredited powerhouse vocals behind C+C Music Factory’s classic “Gonna Make You Sweat (Everybody Dance Now)”to seeing her debut solo single “Carry On” reach the #1 spot – in her own name – Martha has unquestionably made her mark in music history.

Beginning her musical journey in the late 70’s as one half of the disco group Two Tons of Fun, Martha found herself singing with the incomparable Sylvester. Twenty-some years later, fans still speak of how extravagant and over the top their shows were! Sylvester’s strong, high-piercing voice rang loud and clear over the massive band sound while swooping through the horns and guitar sounds, Two Tons added the icing on the cake with their booming vocal harmonies.

In the early 80’s Two Tons of Fun proudly declared, “Hi, we’re your Weather Girls” and a new talent emerged onto the scene. As part of the Weather Girls, Martha scored a Grammy Nomination for a song that was destined to become a cult classic. Yes, “It’s Raining Men” – the original song that confirmed it was time to leave your umbrellas at home, rip off the roof and stay in bed. Martha continued to sing with the Weather Girls until the late 80’s when she felt it was time to move on to the next tenure of her career.

Over the next few years, into the early 90’s, Martha became one of the most sought after session singers and soon found herself recording for numerous acts – Seduction and C+C Music Factory to name a few. From “You’re My One and Only (True Love)” to the already mentioned “Everybody Dance Now”, Martha was all over radio airwaves and had club-goers moving to her distinct vocal styling. However, riding high on the charts soon found turmoil for Martha. As a new era of dance music set in, she saw herself being replaced in music videos and promotional pictures by a “more marketable image”. Her stint with the house music act Black Box lead to her performance on lead vocals on five of the groups’ singles and put Black Box on the music map. “Everybody Everybody”, “I Don’t Know Anybody Else” and “Strike It Up” were among their biggest hits – all of which still receive airplay some 10 years later. Martha eventually received the recognition that was way overdue. Nevertheless, many wondered if she could really make it on her own. She was about to prove that she was destined to be a solo success!

The year was 1993 when Martha took control of her voice with her first solo CD release, which produced three #1 dance singles. “Carry On”, “Give It To You”, and “Runaround” all skyrocketed to the top of the charts. There was no longer any doubt that it wasn’t the “more marketable image” that made earlier groups so successful, but rather Martha’s incredible sound.

DJ Todd “The God” Terry knew from day one that the way to have a number one single was to have a good melody, good lyrics, and a great voice. He immediately called upon Martha and teamed her up with Jocelyn Brown to have their immense talents on his “Keep On Jumpin” and “Something’s Goin’ On” singles. Seeing both songs hit number one with her own name attached was something that Martha was now beginning to grow accustomed to and it wasn’t going to stop there.

Triumph continued to follow Martha with her second solo CD in 1997. “The Collection” featured highlights from her twenty year long career as well as the new singles, “Come”, “Catch The Light”, and “It’s Raining Men…The Sequel” which featured Martha singing alongside RuPaul.

Martha then collaborated in 2000 with Small Voices Calling on their “Sounds Of A Better World” compilation CD. A project that would benefit a variety of charities which find innovative ways of supporting children in their environment. “Listen To The People” saw Martha riding high on the charts once again and captured audiences worldwide with its’ positive message of hope and inspiration.

It’s been a long and bumpy road for Martha, one that’s lead her to pain and heartache as well as love and joy. One thing for sure is that her music continues to spread a positive message to unite people worldwide. Whether she is belting out a house groove or delivering a church-inspired gospel piece, her music captures our hearts and flows through our souls.