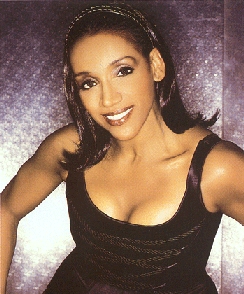 Born and raised in Philadelphia, Kathy Sledge is the youngest of five girls from Edwin and Florez Sledge. By age 6 she was singing songs with her sisters in perfect harmony.

Kathy was born to perform. Along with vocal coaching and teachings from her grandmother, an experienced opera singer, her father was the other half of the legendary Broadway tap dance duo, Fred & Sledge. Kathy’s elementary school years were spent performing in churches, clubs and local talent shows. As their star rose in the Philadelphia area, word around town was that the “Sledge Sisters” was the ‘act to see’. A talent promoter contacted them to perform at a local cabaret and the rest is truly amazing history.

Sister Sledge signed their first record deal with Atco Records, leading to their first No. 1 record in the UK ‘Mama Never Told Me’. Their second international hit record ‘Love, Don’t You Go Through No Changes on Me’landed at No. 1 on the Japanese charts, after which Sister Sledge won the prestigious and highly sought after Silver Award at the Tokyo Music Festival.

Hit songwriters Nile Rodgers & Bernard Edwards wrote and produced ‘We Are Family’ just for Sister Sledge. The song and the album both rose to No. 1 on every imaginable chart all over the universe and also earned a Grammy nomination. Kathy recorded the lead vocals to ‘We Are Family’in just one take.

In 1992 Kathy recorded and released her very first solo album on Epic Records, Heart, which contained the No. 1 dance record ‘Take Me Back to Love Again’. In 1995 she recorded one of her all time favorite songs,‘Another Star’. Originally recorded by Stevie Wonder, Kathy’s version went on to become the No. 1 club anthem in all of Europe, including a stint at the No. 1 position on the pop charts in Italy. In 1997 Kathy teamed with Robert Miles and recorded the top 20 pop and dance hit‘Freedom’.

The start of the millennium was a monumental time for Kathy and her sisters. In addition to a Rock & Roll Hall of Fame nomination, Sister Sledge was voted by VH1 one of the most successful girl groups of all time, second only to the Supremes. In 2001 ‘We Are Family’ was voted the No. 2 biggest record of all time.

Today Kathy finds herself as busy as ever. She starred in the hit musical ‘Oh What a Night’ to standing room only crowds throughout Australia and the national gospel play, ’What Men don’t Tell’. She still performs selected shows with her sisters, whenever her exciting solo schedule permits. Her amazing ten piece ‘live band’ show consist of some of the most talented musicians ever to ‘grace’ the stage: Philip Lightfoot (Drums), Joe Johnson (Percussion), Derrick Graves (Bass), Mark Walsh (Guitar), Mike Kwas (Keyboards). Suzanne Slaughter-Wingate (Vocals), Princess Stevens (Vocals) — and of course, Kathy on lead vocals!

Nile Rodgers puts it best; “Kathy has one of the most original and unique voices in pop music. Always has and always will!