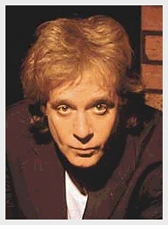 One of the most popular rock and roll artists of the past two decades, Eddie Money’s songs like “Two Tickets To Paradise”, “Baby Hold On”, “Take Me Home Tonight”, “Shakin'”, and “Think I’m In Love” reach across generations. Eddie’s faithful fan base continues to flock to his shows and buy his records.

With over 12 million in record sales worldwide, Eddie’s career dates back to the mid 70s when rock impresario Bill Graham discovered him at one of Graham’s legendary San Francisco Sound Of The Cities talent shows. Graham managed Eddie’s career until his death in 1991. During that time, Eddie had over 10 Top 40 hit singles and became one of the most successful touring acts of the era. “Losing Bill was like losing a father,” Eddie says. “I still haven’t quite gotten over it, but he would want me to rock on.”

His well-known rock and roll extravagances have long since been traded in for a spiritual, family oriented lifestyle. His beautiful wife Laurie, and their five children often accompany Eddie on the road and sometimes on stage. “At this point in my life, my family is the most important thing to me,” explains Eddie. “I’ve had success, money, fame, and power for a long time, but nothing gets me higher than the relationship I have with my wife and children.”

Eddie gained a new audience in the 1980s after having a hit with former Ronettes’ singer Ronnie Spector. “Take Me Home Tonight” was a Top Five Grammy nominated hit across the nation and a heavy rotation video on MTV.

He has continued to rock on, and 1997’s Shakin’ With The Money Man, was recorded in July 1997 at a sold out concert in southern California. These new versions of Eddie’s hits show how great rock songs about everyday life can hold up through the years. “A great rock song is a great rock song forever,” claims Eddie.

His fans agree. In 1999, they were thrilled with the release of Ready Eddie. With such tracks as “Ready to Rock”, “Don’t Say No Tonight”, “It’s Gotta Be Love” and “Can’t Go On”, Eddie was in fine form.

Eddie Money’s longevity in the rock and roll can be attributed not only to many memorable songs and performances, but to his personality and ability to relate to everyone on an everyday level.

Expanding his horizons into film and television as well as professional sports arenas, Eddie was the featured character’s music idol in David Spade’s 2001 film Joe Dirt and even turned up as Mimi’s ex-husband in an episode of ABC’s The Drew Carey Show. He appeared on an episode of CBS’s King of Queens. He has also has worked on theme songs for the Arena Football League and Major League Baseball and is frequently asked to sing the national anthem at major sporting events.

Eddie Money continues to tour, playing as many as 150 shows per year. “I still enjoy this as much as I did 20 years ago.” he says.