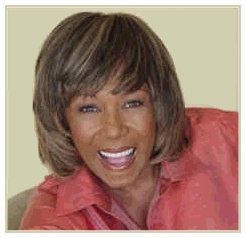 Born in Philadelphia on September 9, 1945, Dee Dee began singing in her grandfather’s church.

Answering a newspaper ad at age 13 for a girl who could read music, play piano and sing, she was soon singing background vocals on records by Frankie Avalon, Freddie Cannon and Chubby Checker.

In 1962 she took center state at Cameo Parkway Records when she was asked to record her first solo record, “Mashed Potato Time”. The record soared up the pop and R&B charts and was followed by a string of hits: “Gravy (For My Mashed Potatoes”, “Ride” , “Do The Bird”, and “I Really Love You” among them. Only in her teens, DEE DEE SHARP became an international star. She toured the U.S. and Europe quite often as part of Dick Clark’s “Caravan of Stars”, working with just about every major act in the golden age of rock and roll.

Though best known for the dance hits she made famous in the 1960’s, Dee Dee Sharp is also known for her interpretation of ballads and show tunes. She became the first rock and roller to perform in major supper clubs and show rooms working with such legendary performers as Gizelle McKenzie, Frank Fontaine, Don Rickles, Donald O’Connor, Tom Jones and Lou Rawls.

Her many television appearances have included “Ed Sullivan”, “Tonight Show”, “Mike Douglas”, “American Bandstand”, and “Entertainment Tonight”. Her music has been featured in such films as “Sister Act”, “Hairspray”, “Desperately Seeking Susan” and Troop Beverly Hills”.

Singing is what Dee Dee Sharp loves best. Tantalizing vocals with a sassy style have been Sharp’s signature during her thirty year career as a song stylist. Whether appearing in a plush showroom, performing before royalty, working a crown into a frenzy in a popular club, or headlining a rock and roll revue, audiences love this lady – truly deserving the Diva title!

Performances by Dee Dee Sharp are powerful, yet passionate and versatile. It is a rare gift to be able to hold and captivate an audience through voice and song. Dee Dee Sharp is a singer who has been doing just that for more than 30 years.  Her repertoire includes contemporary rhythm and blues, mixed with current jazz and pop hits, in addition to her own vintage rock & soul favorites. Dee Dee gives her own specialized treatment to every song, packed with remarkable emotional delivery.