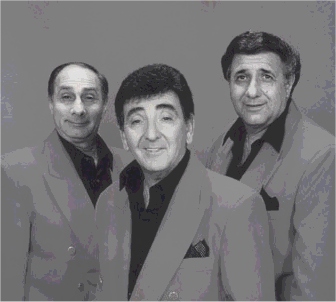 Danny & The Juniors began singing together in the early 1950’s. The four Philadelphia youngsters — Frank Maffei, Danny Rapp, Joe Terranova and Dave White — were only 13 and 14 years old and known as The Juvenairs. Big fans of the local rhythm and blues radio stations. it was there they they heard the first stirrings of a new music soon to become known as Rock ‘n Roll. They knew this was something they wanted to be a part of and began to perform the new music as well as their own original material at school dances, local clubs and restaurants.

As record companies began a frenzied quest for young people who could perform the new genre, the Juvenaires were soon discovered and transformed into Danny & The Juniors. When their own original song “At The Hop”was recorded, they were on their way — straight to the top.

A monster hit on 5 continents, “At The Hop” reached #1 on pop, country and rhythm and blues charts. Today it stands as the #23 all-time biggest record according to The Billboard Magazine List Of #1 Hits.

In the face of parental opposition and critic’s prediction that rock ‘n’ roll was a passing fad, their next hit, “Rock ‘n’ Roll Is Here To Stay”, became a veritable anthem and self-fulfilling prophecy.

Early in 1958 Dick Clark presented Danny And The Juniors with a gold record for “At The Hop” on American Bandstand, the first of many awards and accolades they would receive over their career, including Best New Group of 1957 and continuing to the present. More recently they have been awarded the prestigious Philadelphia Music Alliance Achievement Award.

Danny And The Juniors have toured with many early legends and founders of American Rock In Roll including Fats Domino, Chuck Berry, Buddy Holly, Jerry Lee Lewis and The Platters in the famous Alan Freed Big Beat Show. They have appeared on American Bandstand almost 50 time, as well many other TV shows.

They have traveled millions of miles and entertained millions of people in all fifty states, Canada, Europe, South America and Asia and feel privileged to be able to continue to do so.

Dave White left the group in the 1960s to concentrate on writing and production and composed a number of hits including “You Don’t Own Me” for Leslie Gore and “Like A Baby” for Len Barry.

In their fifth decade as performers, Danny & The Juniors appear at conventions, theatres, clubs, casinos, fairs and festivals. Their wholesome, fun-loving stage show is embellished with comedy, impressions, bright costumes and audience participation, and is regarded as one of the best in the business.