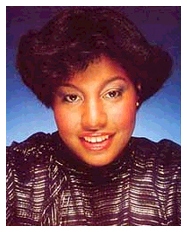 With Cheryl Lynn was born in Los Angeles, California on March 11, 1957. Her mother was minister of music in their church and Cheryl sang in the choir throughout her youth. She later travelled the circuit with greats James Cleveland and Stan Lee, and gives full credit for her soul and spirit to these influences, especially her mother.

Her professional singing career started in 1976 when she landed a job as a background singer in the national touring company play, The Wiz. She went on to play the role of Wicked Witch of the West.

That same year, she appeared on The Gong Show, a very popular Seventies TV show where contestants had 45 seconds to display their talent before they could be “gonged” and taken away. Cheryl Lynn blew everyone away with her performance of Joe Cocker’s You Are So Beautiful and she won the competition. She later told Dick Clark during her appearance on American Bandstand that record industry executives were calling about her soon after the win.

Cheryl Lynn signed with Columbia Records and her self-titled debut album, Cheryl Lynn, was released. The LP featured her first and biggest hit, “Got To Be Real”, which has often been called one of the defining moments in disco. The song peaked at #12 on the pop singles chart and #1 on the R&B chart.

Subsequent successes came with such songs as 1979’s Star Love, 1981’s Shake It Up Tonight, If This World Were Mine, a 1982 duet with Luther Vandross that covered a Marvin Gaye & Tammi Terrell song, and 1984’s Encore, which was written and produced by the Minneapolis funk duo, Jimmy Jam & Terry Lewis. She also provided the female backing vocal on the single, Georgy Porgy, for the pop-rock band Toto, from their 1979 debut album. Two more albums followed in 1996.

Cheryl Lynn continues to remain active in music, touring Japan and performing at charity events in her Los Angeles hometown. She has also performed on several TV specials, appearing on HBO’s Sinbad’s Summer Soul Jam 4 (1998), hosted by comedian/actor Sinbad, and on ABC’s The Disco Ball … A 30-Year Celebration, which aired in January 2003. Her 2004 single, “Sweet Kind Of Life”, which was also written and produced by Jam & Lewis, was featured on the movie soundtrack for the animated film Shark Tale. Mary J. Blige and Will Smith covered Cheryl Lynn’s signature song, “Got To Be Real”, on the same soundtrack. On September 19, 2005, “Got To Be Real” was inducted into the Dance Music Hall of Fame.