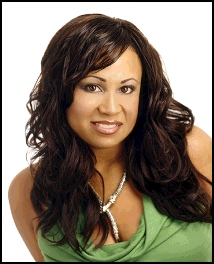 Just a few words to encompass the multi-talented entertainer and Internationally supreme recording artist CeCe Peniston. When her first single ever was released in 1991, she was immediately thrust into the music industry worldwide and CeCe has continued with success ever since. She was born on September 6, 1969 in Dayton, Ohio and spent her formative years in Phoenix, Arizona.

CeCe began her recording career, after graduating from Phoenix College, at A&M Records with her debut album, Finally, selling one million plus copies and achieving U.S. RIAA GOLD certification. Her first single, “Finally”, achieved Billboard #1 chart status and has sold multi-platinum world-wide, in addition to being featured on more than thirty compilation albums. CeCe thrust past the one-hit wonder mark and continued to achieve Billboard Top Ten chart status with singles including: “We Got A Love Thang”, “Keep On Walkin”, “I’m Not Over You” and her new hit single released in 2001 titled “Lifetime To Love” which skyrocketed to Billboard #2 chart status. All of her other singles released have achieved Top 40 status including: “Inside That I Cried”, “Crazy Love”, “I’m In The Mood”, “Hit By Love”, “Movin’ On”, “Before I Lay (You Drive Me Crazy)” with MCA recording artist JoJo of KC & JoJo, “I Know That He Loves Me Too” and “Nobody Else”.

CeCe has continued to travel nonstop since 1991, touring to sold-out venues domestically and internationally. She made nine music videos, contributed her voice to numerous motion picture box-office hit soundtracks, graciously allowed the Oprah Winfrey Show to utilize two of her hits on request, performed live for the NBA, WNBA, and NFL, appeared in thousands of publications, loaned her hit single “Finally” to the Summer Olympics 2000 Closing Ceremony in Australia and made numerous guest appearances on Regis & Kathy Lee, Rosie O’Donnell, Jay Leno, Arsenio Hall, BET with Donnie Simpson, Ricki Lake, MTV, ShowTime At The Apollo, and VH1.

She successfully toured with Grace Jones, Peabo Bryson, Tasha Scott & Tony Terry in The WIZ performing throughout the U.S., in addition to performing in successful runs of both “Treat Her Like A Lady” and “When A Woman Is Fed Up”, fulfilling a personal goal and dream.

In addition to Aretha Franklin’s personal request to perform at Aretha’s private birthday party in Detroit, CeCe has had the distinction to perform at The Vatican and to be historically the first female entertainer to visit and perform in South Africa after the abolition of apartheid. Former President Bill Clinton invited CeCe to perform at both of his Presidential Inauguration Ceremonies in Washington, D.C. and by Mrs. Hillary Clinton for her political achievement.

In the midst of such overwhelming success, CeCe has also been bestowed numerous awards including: Billboard Best New Artist & Best New Song of The Year, ASCAP Song of The Year & Pop Songwriter of The Year & Most Performed Song of The Year, Annual Winter Music Conference’s Best New Dance Artist & Best Dance Artist Solo & Best 12″ Dance Record, BMI Urban Award of Achievement, Governor’s Key to The State of Arizona for being a role model and for achievement, and most recently CeCe was inducted into the Phoenix College Hall of Fame. CeCe also has been a member of ASCAP since 1991 and has been successfully running her own production and publishing companies for many years.

CeCe makes time for a true passion in her life too, her charitable work. She founded the CeCe Peniston Youth Foundation in 1997 and helping to raise funding for many other organizations involving particularly HIV, women and children in need, AIDS, hunger and equality. She blazed a track on jazz artist, Jeff Larbes’s album and two Phoenix Merry Christmas Arizona albums, with proceeds going to Multiple Sclerosis. Since 1993, she has entertain the U.S. troops overseas every year that she could.

CeCe Peniston has just begun to make her mark on the world. While having established herself as one of the paramount artists of the nineties and the new century, CeCe still has stayed true to herself and humble while fueling the deep passion for her artistry.  Just watch this talent extraordinaire continue to keep the world fired up and jumpin’ for more and more!