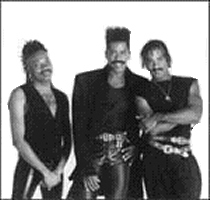 Modern music history would be amiss if there wasn’t at least a chapter in every decade about the legendary group known as CAMEO. From the seventies through today, Cameo has been churning out trailblazing hits, and selling upwards to ten million albums. The group’s pivotal sounds have marked major turning points in music.

Larry Blackmon has been synonymous with Cameo since the beginning of his career in the music industry, growing up in New York City, and digesting the sounds of the city streets. The kind of non-stop activity that Larry Blackmon creates has consistently propelled the across-the-board success that Blackmon and Cameo have enjoyed for over 25 years. Larry Blackmon made his place in the archives of urban music because he possesses a determined mind and spirit. As an accomplished writer, producer and director, Blackmon was one of the first to create theme based videos.  His abiding search for excellence is exhibited through his endeavors to constantly improve his creativity through the study of dance, acting and music.

Blackmon has produced projects for several outstanding and chart topping artists including Bobby Brown, Chaka Kahn, Red Hot Chili Peppers, Arsenio Hall and 8 Ball & MJG, just to name a few.  Larry Blackmon is always anxious to take on new challenges.  A style & trendsetter, he is an icon in the music industry.

Many artists have paid tribute to Larry Blackmon through the replication of Cameo’s unique funk-filled sounds,  such as TuPac, Boys II Men, Will Smith, Snoop Dogg, just to name a few. Blackmon participated and performed on the HIT Single “Loverboy” by world-renowned artist Mariah Carey!

It was Blackmon who popularized the “AWE” – that has been imitated, but never duplicated! Likewise, the phrase “WORD UP” has never lost its appeal with the urban population.

Blackmon emerged as a recording artist via the 1977 debut LP. CARDIAC ARREST, which included the hit ” Rigor Mortis”, and since then Blackmon and Cameo have enjoyed an action-packed, chart filled career.

Cameo’sS worldwide breakthrough with the WORD UP- LP shook things up in 1986 and the platinum-selling album was an international smash. The album was Grammy nominated for the “Record of the Year.” After opening the show with a rousing performance at the “1st Annual- 1987 Soul Train Music Awards”, Cameo took home two awards “Best Single/Group” and “Album of the Year”. The second release from this album “Candy” did equally as well while the cut “Back & Forth” climbed to the top 3 on R&B charts.

The following year Cameo’s worldwide recognition continued with the release of the Blackmon produced LP MACHISMO – (1987). This album featured the extraordinary Miles Davis with Blackmon & Miles collaborating on the single “In the Night”. The collection also included a social commentary – “Skin I’m In ” featuring such talented musicians as Maceo Parker, Fred Wesley, Bernard Wright, Randy Brecker and Michael Brecker. The year was also marked by Cameo receiving the American Music Award for ” Favorite Group, Soul, R&B.”

Cameo’s long string of successful albums include Real Men Wear Black (1990), Emotional Violence (1991), In the Face of Funk (1994), Nasty (1996) and Sexy Sweet Thing (2000). 2002’s spectacular Anthology, a double-disc set also released by Mercury, covers a lot of ground and does the group justice as a total package.

The group’s core – Blackmon, Tomi Jenkins and Nathan Leftenant – hasn’t gone away either, despite membership fluctuations that at one time saw the band’s membership balloon to 11 people. Cameo has stuck together. The trio continues to tour the globe to this day.