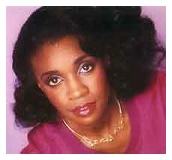 “RING MY BELL” was one of Anita Ward’s most successful hits. For the better part of 1979, her soaring voice would be heard on every radio station in the country. This song swept the disco scenes and kept other upcoming songs at bay. It was the number one record in the United States, Canada, Central America, South Africa, and even Israel.

“It was unbelievable,” Anita recalled. “Overnight I was suddenly a household name. I was treated like I was someone special. People would come up to me and ask if they could touch me.

With the success of “RING MY BELL” Anita Ward went on an extensive tour in the United States and Europe which included, Spain, the Netherlands, and Germany. She also toured Central and South America, Mexico, and Brazil. The Midnight Special, The Merv Griffin, America Bandstand, and Top Of The Pops in England were among several television appearances made during the reign of her hit record.

The oldest daughter of a minister and homemaker, Anita started singing at age nine in the church choir. At the age 14, she was spotted at a high school talent show by an enterprising young producer who wanted to sign her with a recording contract, But, her parents thought that she was too young and wouldn’t budge for the idea. At Rust College in Holly Springs, MS, she sang in the schools world famous acappella choir, singing in cathedrals from Portland, Oregon to Romania. Her first recording with The Rust College Acappella Choir featured opera singer Leontyne Price.

After having toured both in and out of the country, Anita chose to resume the teaching career she had started prior to her worldwide hit. Although she’s now a full-time wife, mother, and teacher, the music within her will never die.

In recent years, Anita was a featured guest artist at a benefit show in Paris France along Grace Jones, The Village People, Gloria Gaynor, Imagination, and many others.

Now that the sound of the 70’s is celebrating its rebirth, Anita intends to resurge as well.

“I’m going out there with a lot more fire and determination – because now I’ve truly lived the songs I sing,” said Anita. She added, “I’m not cocky, just confident.”