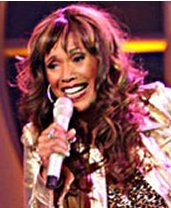 ANITA began singing in church where her parents Rev. Elton and Rev. Sarah Pointer were pastors. Nurtured in the church and seasoned by a life long interest in different musical flavor, she has incorporated an abundance of influences into a sound that is, exuberant, joyful, sultry, powerful, and always unforgettable. By the early 1970’s ANITA had redefined her voice to such an exacting point that rock luminaries like, Dave Mason, Taj Majal and Elvin Bishop were soliciting ANITA for her phenomenal vocal services.

Yes You Can Can, by Allen Toussaint so moved ANITA that she encouraged her sisters to include it on their first album. ANITA’S lead vocal on the track made this song The Pointer Sisters’ first hit single. Another hit song, written by ANITA & BONNIE entitled Fairy Tale won ANITA her first Grammy, became a country hit and was recorded by the late Elvis Presley. This enabled ANITA with her sisters to become the first black female group to grace the stage of the world famous Grand Ole’ Opry. In 1975 with ANITA’S lead vocals, gold struck again for The Sisters when their Mega #1 hit, Betcha Got a Chick on The Side, another song written by ANITA and her sisters, established them as one of the top female groups in the country. From those humble beginnings in the early 1970’s to the late 1980’s with ANITA’S lead vocals paving the way, THE POINTERS SISTERS set up a permanent residence on the music charts.

Once again ANITA’S lead vocal on Bruce Springsteen’s Fire was another chart-topper. In 1984 she wrote the song that expresses how she feels about life, I’m So Excited. It rose to the top of the charts and became ANITA’S theme song.

One of the highlights of her career came when she received a star with her sisters on the Hollywood Walk of Fame. ANITA continues to write songs and in her leisure time has amassed a large collection of Black Americana. Her two decades of collecting have not only given her joy but have taught her an appreciation of the past.

ANITA gives thanks everyday for the God-given ability to perform for the world and share the greatest communication of all, the gift of song.